So much to say, but so little time.  Here’s a quick video to give you sense of what it’s like out there lately

My little girl was helping to inspect our hives. We are up to 11. It’s a wild ride!

They swarmed!  I knew it was coming given all the swarm cells, but I was hoping maybe all the splits I made would prevent the swarming. Well, not for this hive. Check out all the excitement.

After they swarmed, I noticed a few bees hovering over a shrub. Sure enough that’s where they landed! They were visible and reachable rather than way up in a tree top where I definitely wasn’t going to go. I got my shear and clipped my way through thorns and thickets until I cleared enough to have a good look.  Here’s the cluster  somewhere in there is the queen.  Because of her strong pheromones, they didn’t pay much attention to me.  I was basically chasing down thousands of bees like a bee bounty hunter

Then I got them in the box. Carefully. VERY carefully, cutting branch by branch.

Finally, I was able to get them in a nuc box. I’m a little nervous though. Take a look at this. Doesn’t it look like they’re all leaving? We’ll see what happens tomorrow. I’m pretty sure I got the queen in there. If that’s right, then they’ll stick around. If it isn’t, then somewhere in the woods behind my house there are ten to twenty thousand bees hanging out and democractically deciding what will be their permanent home.

The ladies built some comb under the hive cover. They had lots of honey stored.  Had to help myself to some. Yummy! 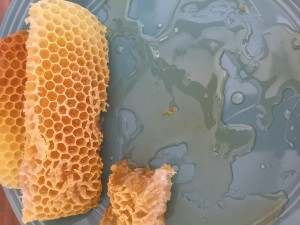 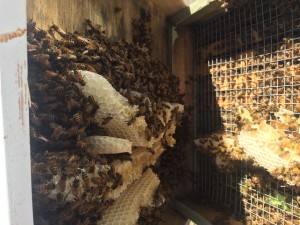 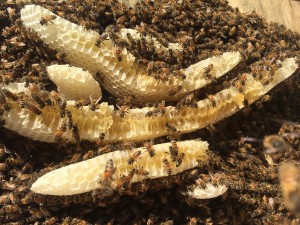 A few days ago, I saw the bees clustered around the hive entrances after a hot day and got really nervous that they were getting ready to swarm. Until then, the bees would head inside once the sun started going down.  On this particular night by 8:30pm they were still in a bunch outside, and the numbers were growing.  I thought for sure they’d be gone by morning having swarmed in a tree out of my reach.  It didn’t happen.  The next day they huddled again, and then they did the same thing again on another warm day.  Turns out, this is how they cool off.  They were also hanging out by the container pond I set up for them as a water source.  Lesson: bees have chill. 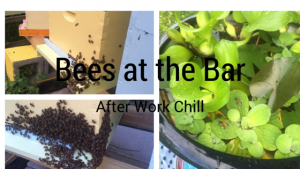 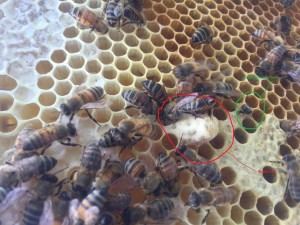 Maybe you’ve considered getting a couple of hives, or maybe you’re just intrigued by the curious life of an apiary.   Here’s a video of my backyard so that you can see one example of the kind of space necessary to keep bees.  I live in the suburbs, and things are going fine so far with beekeeping in the backyard  – all two months!  I checked in with my next door neighbors before I started.  Chatted with them a little bit about what to expect and why, and they were fine.

You can keep bees in more densely populated urban neighborhoods too.  There is a growing number of rooftop beekeepers, and right on the concrete slab behind a townhouse you can place a hive stand and get started, if you are so inclined.  Be sure to check your HOA bylaws, and city code.  Many municipalities are recognizing the importance of pollinators like bees, and doing what they can to support, or at least allow, beekeeping.  There is also the option of partnering with someone who has space and wouldn’t mind hosting.  There’s plenty of that going on too.

I’m no videographer, but I hope this gives you a sense of what it’s like in my bee yard.

But do you know a queen when you see one?  She’s here looking all royal.  If you look closely enough you can see some of the eggs she recently laid.  She’s surrounded by worker bees and capped brood. 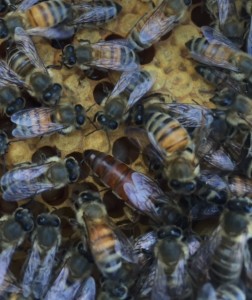 Just a few days after taking that pic things got a little wild in the bee yard.  Found a bunch of supersedure cells and swarm cells, and went from two hives to 5!  Here are some of the pics: 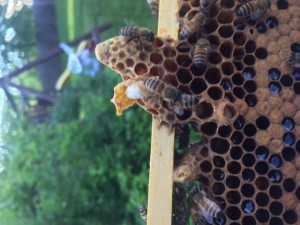 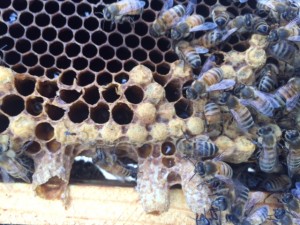 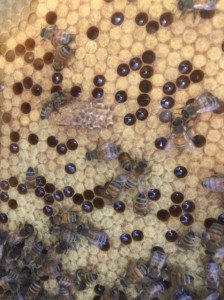 Supersedure cells look like peanuts, and swarm cells are often at the bottom of the frame.  They are both queen cells.  Worker bee cells are much smaller.  You see some in the pics.  Drone cells are just a bit more raised than worker bee cells, you can see some of those in the second pic.  That liquid is honey.  The nursing bees like to keep honey and pollen close by the brood for feeding purposes.  When I took these pics, being the newbie that I am, I didn’t realize I had all these queens in the making.  Basically the workers were preparing to flee the hive or felt something was wrong with the queen and needed to raise a new one, and I didn’t get that right away.  I think they actually did swarm not long after I checked, but I just missed it.  Anyway, I made splits with the queen cells and have five hives now.

Here’s something cool.  It takes about 16 days for a new queen to develop and hatch.  So the cells you see above became the queens and hatching queens you see below.  If you look closely you can see the queens making their way out in the first pic to the left.  There are a couple of queens making their way out of the cell.  They’ll duke it out once they are free; queens aren’t into sharing their domain.  May the best queen win! In the second pic is a new queen from one of the new hives.  She hatched this week. 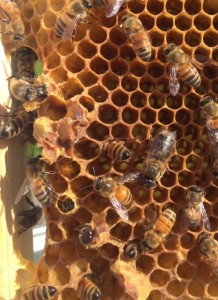 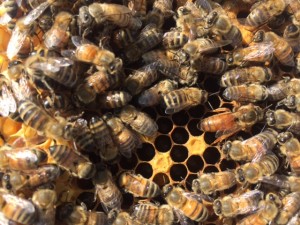 This is me feeling exhilirated and a little stunned at all the growth.  Wowzer!  See the the nuc boxes behind me (smaller hive boxes)?  Those weren’t there just over a week ago.  It just got real, super fast. 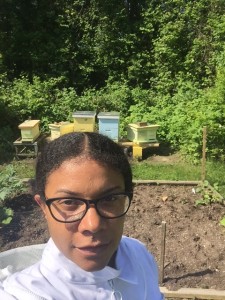